The maintenance of rail vehicles is very time-consuming. Especially the overhaul of the bogies requires a longer downtime and causes high costs for the operators of the vehicles. The appropriate sensor technology, combined with an intelligent edge device, enables the optimisation of maintenance intervals and strategies.

Podcast: Interview about the project

"We want to get information from measurement data create." - Patrick Zenker and Burkhard Schranz speak about the joint project and the added values Digitalisation in the rail vehicle sectorh.

In rail vehicles all over the world  provide products from Trelleborg for a  comfortable and safe ride. Suspension systems,  Steering arm and axle bearings, buffers and others  Vibration damping components made of  Plastic, rubber and metal decouple the  Car body from vibrations from the  bogie, the wheelsets and the track.

These components are subjected to high forces,  which in the long run lead to wear and tear. In addition  The limited service life of the rubbermaterial, which can be damaged by climatic influences andageing additionally. In order to increase theand operational safety of the vehicles must ensure that Bogies regulatebe maintained on a regular basis. The effort for this is  immensely, however, as the vehicles from the  have to be taken into operation. In the depot the body of the wagon is lifted off and all Wear parts changed. Between 40 and 60 per cent of the total maintenance costs are accounted for by the revision of the bogies.

The maintenance intervals are currently still fixed predefined, irrespective of the actual condition of the individual components. This is how it happens, that vehicles go in for maintenance, whetherThey must be able to take into account all thetolerances could easily have been extended further.can drive.

To increase the running time of the vehicles, launched Trelleborg Together with railsvehicle manufacturers and operators a Innovation project. With the help of sensor-based, industrial IoT technology, it should be possible to condition, wear and tear and acute proproblems of components in the bogie during operation. In addition should provide a broad data basis for further Investigations and improvements be created.

As the component in the bogie that is suitable for  best suited to the task, identified Trelleborg the primary conical spring. It sits between track and bogie frame, directly on the wheelset. All forces and loads that on the train are transmitted via this path. initiated. The idea: From the deformations back to the spring, which forces have had an effect on the train, so as to not only wear of the spring, but also the condition of adjacent components. To record the real-time loads, theWrapped Trelleborg with a hardware partner the complex absolute measuring system ConeX3 and chose optiMEAS as a technology partner for the realisation of the IoT solution from the sensor to the cloud.

Firmly integrated into the primary conical spring, the The measuring system continuously monitors all movements. Non-contact sensor technology measures The long-term stability of the static and dynamic Loads and paths in all spatial directions.

The microcontroller of the sensor unit prepares records the electrical sensor signals and outputs them via a CAN bus to the IoT device smartRAIL, which is specially designed for the high requirements in the railway sector. Data from up to eight "smart" primary cone springs run here together. Enriched with a precise GPS signal, they are processed together, stored and transmitted via mobile radio or the optiCLOUD transferred.

All the basic IoT functions for datastorage and transmission, interfaces, Remote access, GPS, smart functions and the connection to the cloud brings smartRAIL about its firmware smartCORE already with it. The optiCLOUD not only offers extensive possibilities to flexibly visualise the data, but also an interface for device management. Regardless of where the train is, parameters can be changed from anywhere and firmware updates can be transferred over-the-air to the ConeX3 measuring system via smartRAIL. This allows Trelleborg's developers to adapt and expand their system at any time.

With ConeX3, Trelleborg offers an innovative Measurement system that offers customers real added value brings. During operation, the system records allLoads that are applied to the running gear of avehicle. This real-time data can can be used in a variety of ways to improve processes.and reduce expenses.

Function and condition of primary cone springs and adjacent components in the bogie can be monitored live in relation to position and analyse - an important basis for Condition-oriented maintenance measures on vehicles, tracks and switches. 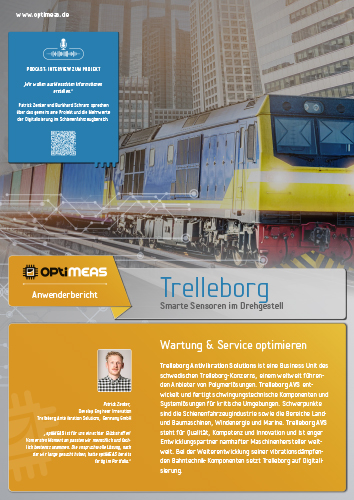